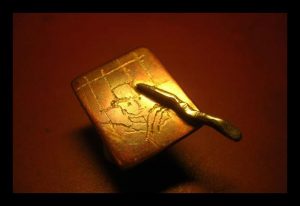 The Swedish Fine Art Print Society has worked to advance the art of printmaking ever since FfGK’s inception in 1887. Initially this was accomplished by organizing print exhibitions, often in collaboration with Swedish and foreign museums and other organizations. During the 1980s a program of grants and project funding was introduced to support artists, writers, researchers, curators, exhibition organizers, printmaking workshops and others. In the year 2000 the FfGK board decided to establish a special honorary printmaking award to pay tribute to individuals who have made noteworthy and commendable contributions to the advancement of fine art printmaking through their artistry, their teaching or writing, their innovations or technical skills.

The award was given the name The Fridell Pin Award after the artist who contributed the greatest number of prints to FfGK portfolios in the Society’s 114 year history up until that point, namely Axel Fridell. This special pin is designed like a miniature copper plate (25 x 20 mm) with Fridell’s most famous drypoint, “Mr. Simmons” also known as The Newspaper Reader (“Tidningsläsaren,”) engraved on the surface. A tiny version of one of Fridell’s own drypoint needles rests on the plate.

The silversmith Karin Ferner from Falun designed this award. She creates a new pin whenever a new recipient of the Fridell Pin Award is selected. The Pin is not awarded at regular intervals, so It may take several years before a new recipient is chosen.
So far there have been 14 Fridell Pin recipients, 8 of them are artists who have also been active as teachers and writers.